As the start of my internship at the Michigan League of Conservation Voters (MLCV) loomed ahead of me, I was both nervous and excited to intern for an organization whose work coincided with my own interests. From what I had gathered from previous online research on the organization and through conversations with my work mentor Mero, MLVC functions as a political organization dedicated to not only holding elected officials accountable for the protection of their constituent’s environmental rights, but also educating and advocating for affected communities that might not have the resources or capacity to advocate for themselves.

This mission appealed to me, as someone interested in combating environmental racism especially in the face of Trump’s presidency.  I wanted to learn more about how to effectively organize community members most at risk of environmental degradation, to educate them about their place in their environment, and how to take action against local environmental injustices. 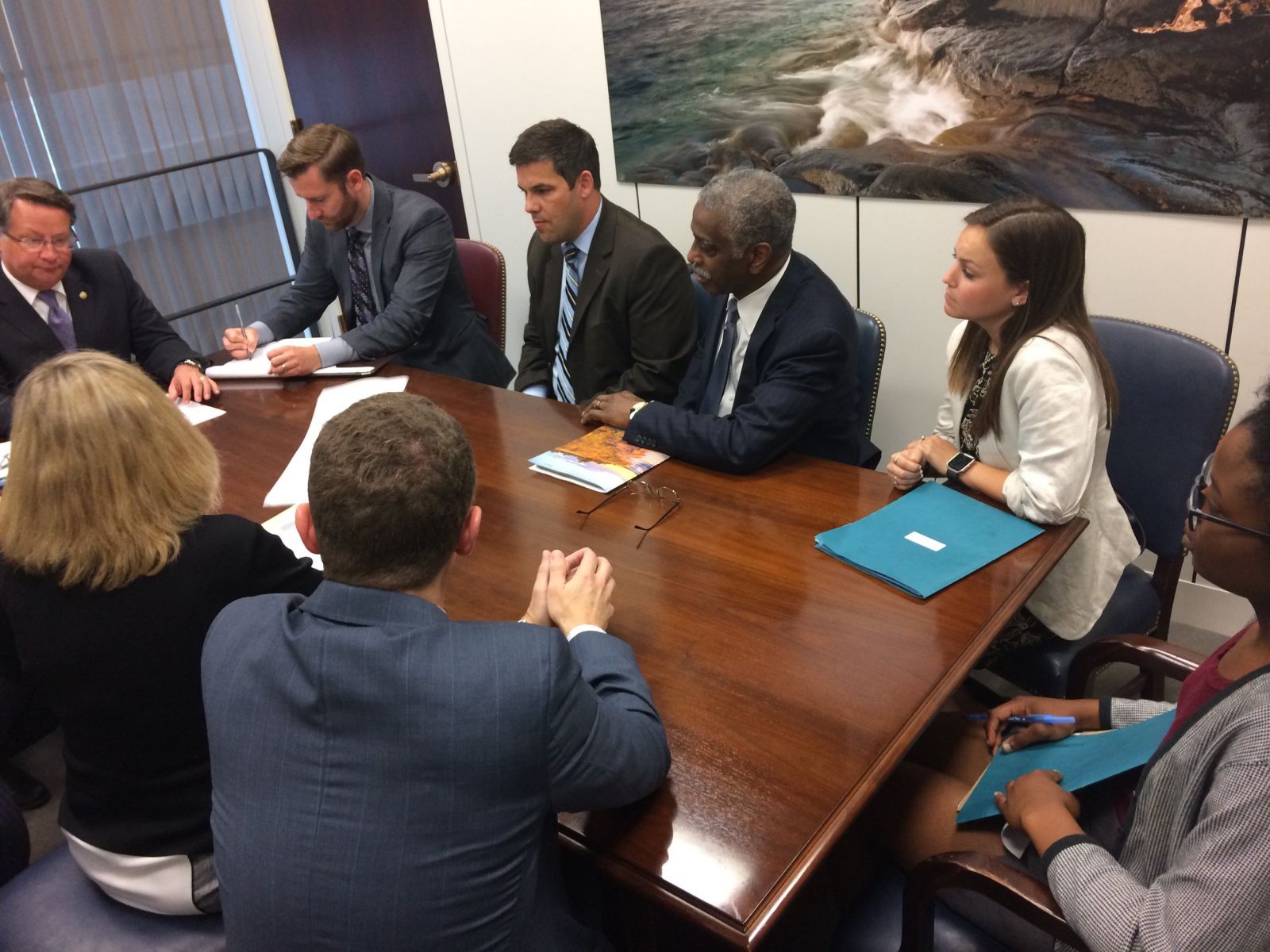 Me (far right) at a lobbying meeting with U.S. Senator Gary Peters.

The first week of my internship started with a bang. My task? Participate in lobby day training activities, and, alongside other employees and board members of MLCV, lobby several Michigan representatives and senators regarding Trump’s proposed budget cuts to environmental agencies. In addition, I learned to advocate for issues specific to Michigan, such as Line 5 and how cuts to the EPA would affect the work of the DEQ.

This opportunity was very exciting because I had recently completed a government course at my college that discussed the importance of lobbying and interest groups in swaying the actions of legislators either for or against certain proposed bills. Aside from the Flint Water Crisis, I was not well-versed in Michigan’s environmental issues; thus, I felt unprepared to speak in meetings. However, sitting in a senator’s office and hearing them talk about how they plan to combat Trump’s proposed budget cuts not only made me feel like a very engaged citizen but also, for the first time in my adult life, I felt like I had the possibility of making a difference.

My first week in the Ann Arbor office after lobby day was both exciting and overwhelming. I finally met my work mentor Mero and the other people who I would see every day. I was given my very own desk, desktop, company email address, and most importantly, a username and password to access the Wi-Fi. But as I sat looking at a folder filled with information about the current issues MLCV is advocating for– I felt overwhelmed with trying to digest so much information about the organization and Michigan’s environmental issues.

As my internship progressed, I began working on two main projects: the Porter Video Project and helping plan a regional supporter meeting in Dearborn County. Working on the Porter Video Project allowed me to dabble in advocacy through storytelling. I was able to storyboard, film, and edit a friend’s story of environmental racism in his community. The end goal of this project was to give my co-worker the opportunity to use MLCV as a platform to educate others about the environmental injustices in his community while simultaneously helping the organization reach new members and expand their social media presence.

As for the regional supporter meeting in Dearborn, I assisted Henry, the southeast MI Regional Coordinator, reach out to local community leaders in Dearborn, contact people in the community to inform them of the meeting, and create an agenda for the meeting. One of my favorite days at the organization was the day that Henry and I went to Dearborn to meet with two local community leaders. It allowed me to step outside of the “Ann Arbor bubble” and visit a community that needs assistance empowering members to understand the threats to their environment so they can better address the entities responsible for said attack and advocate for themselves. At these meetings, I also got to see how to have conversations that lead to possible collaborations and build relationships with organizations that could help us reach new members, as well as increase our visibility in these communities.

Overall, my experience at MLCV has been a very positive one. Although at times I did wonder if my contributions were enough for the organization, I have enjoyed doing all the work assigned to me. My main goal for the summer was to learn how to organize communities in order to educate them and help them advocate for themselves and the projects I worked on allowed me to see different aspects of how to do that. In addition to the work environment being incredibly welcoming and friendly, everyone at the organization made sure I was not only having fun but also learning as much as possible from the internship.

‹ Great Lakes Commission: Getting a Taste of Environmental Policy up Our Team ›
Additional NavigationClose